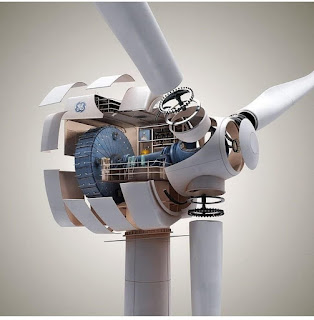 The generator is the main and important element among the elements of the wind turbine because it converts the energy that the turbine absorbs from the wind into electricity so that the turbine absorbs the energy of the wind in the form of kinetic energy in mechanical energy thanks to the rotation of the axis of rotation, then finally converts it into electricity via the generator.

Used in Danish wind turbines that are directly coupled with the grid and use a soft starter for grid connection.

Enercon, EWT, etc. use this type of generator as this design does not need a gearbox, but for grid connection, a Complete Converter is required.

This type of generator for 1MW to 3.5MW turbines became very popular in the last decade. The reason is that it allows limited variable speed operation and has an electronic partial power converter connected to the side of the rotor which significantly reduces the cost.

These are used in turbines based on both Gearless and Gearbox. They use the power converter to a full scale. Electromagnets are used instead of permanent magnets because it is costly to make highly efficient permanent magnets, and rapidly depleting rare earth metals.

This is probably the Least Common Generator type of everything but it was a step in the direction of the DFIG design. Its rotor is connected to the Current Control circuitry, allowing limited-slip variable operation.

The generator is connected directly to the grid and the rotor current control enables a certain degree of variable speed operation (by adding/removing resistance to the rotor winding with the aid of electronic power switches).

All these types of generators can be seen in wind turbines on the utility-scale. Some are more popular than others, due to ease of design, expense, operational reliability, and serviceability.

The asynchronous generator or induction generator is one of the generators most used in wind turbines, it is almost exclusively used in practical life. Perhaps the important thing is that this generator was originally designed as a motor, so it uses coils to create a field when it is supplied with electricity at the start of generator work, instead of the magnetic poles used in the generator. synchronous. It also offers a cheap price compared to the synchronous generator.
Typically, turbines use four or six coil generators. Indeed, a high rotation speed reduces the size and the cost of the generator. As the number of poles is inversely proportional to the speed of rotation at which the production of electrical energy begins.

#4.The way how generators producing electricity

The turbine is connected by the central pin to a generator which contains a large magnetic field. With the rotation of the turbine, the central shaft turns and the coil cuts the magnetic field, so we get electricity. That is, the generator converts mechanical energy into electrical energy by managing a coil in the presence of a magnetic field.
To obtain kinetic energy to manage the coil, we can obtain it by the wind, the water which falls from falling water or the vapor which results from the heating of water with coal, oil or gas natural. All these sources generate the necessary energy
Manage the coil between the poles of a magnet to generate electricity.

The range of alternators with magnets in kits also called wind generators or generator with magnets meets the needs of small wind turbine applications, i.e. low and medium power wind turbines, as well as micro-hydro turbines or tidal turbines requiring high mass power in Direct Drive without speed multiplier, at an attractive cost.

The need for wind energy in the energy system is to replace fossil fuel-based electricity generation to combat climate change on a global scale, but also to mitigate environmental concerns which are more on a regional or a local scale, which is associated with. Fossil fuel-fired power plants emission of particles, nitrogen oxides, or…

Wind Energy in the Middle East The wind is an important source for generating clean energy, and although most Arab countries in the Middle East do not have strong wind speeds, they depend mainly on solar energy because most of this region has high solar radiation during the year, but some countries, such as Saudi…

Table des matières The impacts of the distribution of the airfoils of the blade on the performance of modern horizontal-axis wind turbinesPart #1: Aerodynamic analysisQBlade software overviewType of airfoils that were chosen in this studyThe polars CL (α) and Cd (α) The optimization of the bladesPower regulation by blade settingAnnual production[GWh]Part #2 : Dynamic analysisMaterials…