A high voltage power lines or high-pressure lines are a cable or electrical cables coming out of an electrical power station to connect the current for use in factories and homes. The cable carries a very high voltage of 100,000 volts or more and the electrical current in which it usually flows is AC(Alternativ current ).
The air acts as an insulator between the cables that carry the current. Wood towers, reinforced concrete, or interlocking iron bars can be used to build the towers for a voltage of less than 50 kV. As for the voltage above 50 kV, cross-linked iron towers are used in Europe. For voltages above 110 kV, interlocking iron pipes are also used to build the towers.

You may like also : what is electricity and how is produced

This high voltage is not directly suitable for normal use, but it reduces this high voltage in stages on the way to about 10,000 volts, then to about 3000 volts, and is used in factories when it has reached 760 volts. As for the use in homes and lighting in reducing the voltage to 220 volts in most countries, Some countries also use a 110-volt voltage for home use.

#2 Why are there red and white balls on power lines? 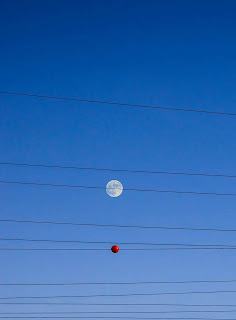 Colorful balls (Marker balls) are installed on the high-voltage landline to warn aircraft while flying.
The balls are made of plastic or aluminum, and they are orange, red, and white in color and each ball has a diameter of 60 cm.
These balls are 17 pounds (7.7 kg) and are attached to the highest line in the tower.
The distances between the balls should not be less than 40 meters according to the International Civil Aviation Organization. These balls cannot be seen at night unless they are highlighted.
These balls are installed near the airports, and there are rules and principles that govern the necessity of installing them according to the height of the aforementioned ground line and the distance from the airport runway and whether the towers are located in the airliner’s take-off or landing corridor or otherwise.
As for the night aircraft warning, it is done by red light bulbs installed on the top of the towers or also in the middle of their height if they are high. These lamps derive energy from a low voltage source if available in the vicinity or from a solar cell system in areas far from urbanization.

A major risk of electrical lines on birds 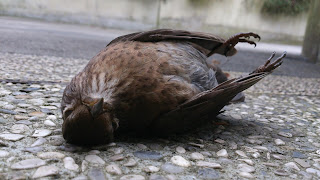 Above ground electrical infrastructure represents a major risk to  birds if some precautions are not taken, due to their size. And its large presence.

Most of the above-ground power lines (both medium and high voltage distribution lines) pose deadly risks to birds through collision with overhead cables and the risk of electric shock.
Bird collision occurs when a bird flies and collides physically with the power cable and usually, The bird is killed because of this collision, or because it occurred on the ground, or dies from injuries resulting from all of this.

As for electrocution, it happens When a bird bridges the gap between two charged elements or a charged element and a ground element. This results in a short circuit so that it flows The electric current through the

body of the bird is electrocuted and is often accompanied by a blackout.
In these countries, the problem of electrocution is a serious threat to a number of species, Especially storks and birds of prey that build their nests on electric towers or use poles as a place to rest.

Power lines are one of the main causes of abnormal bird deaths in a large portion of African-European and Asian flight paths. Collisions with species threatened with extinction from the first supplement to the bird protection directives in many European countries, for example, Spoonbill – Platalea leucorodia, and the problem also exist in Africa.

In South Africa, for example, many species of birds are threatened with extinction, such as the Blue crane and ludwigii Neotis, which are severely threatened because of the collision with the power lines.

The problem of electrocution is not just that an issue about bird conservation, but rather serious economic and financial consequences due to downtime and energy savings, which is a cause of concern among companies electricity distribution.

It is estimated that there are many millions of crash victims annually and there is a high proportion of victims. Black-tailed Godwit – Limosa Limosa in the Netherlands and Houbara and Eagle in Spain and Portugal.

Although at present electrocution is not a problem in northwest Europe, where most of the low voltage lines have been laid underground, however, there are still many countries, in Europe and elsewhere along the African-Eurasian flight paths, that no
Sound in mitigating low and medium voltage lines.

#5 What is the solution to the problem of birds’ electrocution?

There are many solutions to electrocution problems If power lines are to be constructed, constructing them under the ground provides the best solution to electrocution and bird collision problems.
In spite of This is rarely implemented for a large area, due to technical and financial challenges, but it reduces harm to birds and contributes to the lives of millions of birds around the world.


Keep birds away from power lines

Optical deterrents have been tried in the past, “such as using silhouettes on columns to limit birds’ journeys over the lines, but they have proven ineffective. The problem with these devices is that birds get used to them, but as for audio or sound buddies, they enjoy blankets despite the absence of any articles proving their activities. With these deterrents, birds are not likely to get used to it, but the problem is that this cannot be applied over long distances in addition to its high costs and over time it will lose its impact.

This can be done in various ways, including surrounding the electricity line with trees, in order to attract birds to them instead of going to the electrical lines in order to manipulate the movement of birds, but this also requires significant financial and environmental costs.

Although different types of birds fly at different altitudes above the surface of the earth, there is consensus that the lower the power cable line, the better it will be to prevent the collision of birds. There is also a consensus that vertical spacers pose less for birds.

Determining the power lines make it more visible to birds

Since the assumption is that birds collide with hanging cables because they cannot see them, mounting them with devices in order to make them more visible to birds in the air has become the preferred option for mitigating collisions around the world. In addition to making the wire thicker or coating and coloring the wires less visible, there is a wide range of marking devices for power lines that have evolved over the years, including balls, swing boards, spiral dampers, tapes, flight guides, fins, and balls Aerials, tapes, flags, fishing rods, fly balls, and crosshairs.

Why Dinner? Not many people think they make a huge impact on the environment let alone contribute to greenhouse gasses; however, with every food choice, we make we contribute to the hole in our ozone.     But it’s just dinner, how big could that impact be? Certainly, flying cross country is definitely…

To Become Famous isn’t a much difficult task,. You became successful in any field by doing putting your all into it. You wish proper planning and strategy to urge success in any field. We often discuss renewable energy and switching to solar power to help preserve our environment, but going eco-friendly life doesn’t have…

CONFINED SPACES; DEFINITION  & RELATED RISKS   #1-WHAT IS A CONFINED SPACE?   Confined spaces are generally cramped occasional workspaces, used only for repair, maintenance, control of installations and equipment, totally or partially closed, with restricted means of access. An environment is considered as confined spaces any enclosure whose natural ventilation is deficient, in which one enters…

The planet faces a variety of troubling problems that arise from human contamination. Many of them cause problems environmental factors that cause long-term damage to the earth’s ecosystem. Environmental Pollution consists of five basic types of pollution, namely: air, water, soil, noise, and light. #1.Air Pollution Air pollution is by far the most harmful form…

In today’s article, we’ll talk about the difference between renewable energy and non-renewable energy. The announced fight against global warming due to greenhouse gas (CO2) emissions and energy, is becoming one of the major challenges of our modern society. To meet this challenge, the ecological and energy transition must enable the transformation of our practices…