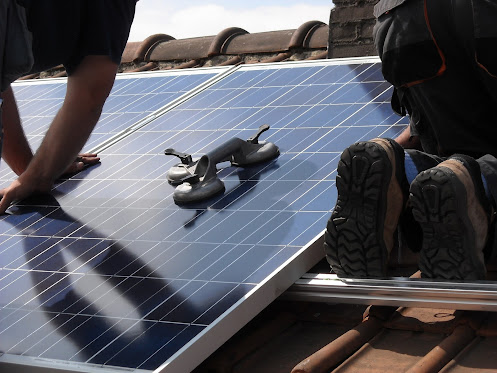 What is a Photovoltaic cell?

Photovoltaic cells are used to generate solar energy, Its purpose is to capture the sun’s radiation, it’s light, to convert it into electricity.
A solar cell, or photovoltaic cells, can work on its own, when needs are lower, for example, a solar calculator or a pocket inhibitor, But to meet the greatest needs they are assembled into solar panels and linked together on a sequence or branch to produce electricity

How Solar cells are made

Solar cells are made mostly of silicon extracted from pure silica rocks or sands where we melt these rocks in special furnaces to produce raw silicon with a purity exceeding 95% and then chemically treated to reach 99,9999999% so that it is used to produce high-purity silicon crystals that are used In microprocessors and microelectronics, or with relatively less purity, it is used in the manufacture of solar cells.

After the production of silicon wafers, their surfaces are chemically treated and a layer of phosphorus or boron is added to reflect the thin polarity of the silicon, thereby creating a double joint capable of separating the current mounts that are produced when exposed to sunlight. Silicon nitrate material is used to paint the surface of the cell and give it a blue color so that the reflection of the light falling on the cell will be foiled and given a greater chance to enter the cell. After that, the process of printing the silver conductor network on the front surface and the aluminum mesh on the back surface is heat-treated and thus the solar cell is ready to produce electricity.

After that, the process of printing the silver conductor network on the front surface and the aluminum network on the back surface is heat-treated and thus the solar cell is ready to produce electricity. These cells are grouped into rows in a row to increase the voltage difference or in parallel to increase the current in a process that is relatively similar to the way ordinary batteries are used. Therefore, some people like to call them solar batteries.

The cells combined together are called the solar panels and collect these panels in a similar way to get a matrix of solar panels, which we connect to the regular electricity network after we convert the direct current into alternating current using special transformers for this process.

Photovoltaic cells are made from semiconductor materials, which are silicon Most common and used due to the availability of its sources all over the world. The cells were large It is flexible and has a high manufacturing cost. As a result, silicon wafers are less absorbent
And absorbing solar rays, this led to an increase in its thickness from 125 to 252 mm, They represent a very large thickness compared to wafers made from other semiconductors such as gallium arsenic which is about one micrometer thick.
So the cost of producing electricity from the first-generation cell products was very high, which arrived at  5 USD per watt.
In general, silicon solar cells are still the dominant commercial ones (around 35%) when they are characterized Its high efficiency

Solar cells from thin films, which depend in their production on several advanced methods, including the chemical vapor deposition method, which is summarized in the manufacture of thin films of semiconductor materials deposited on glass or plastic bases) These bases are deposited.
Thin films of semiconductors to form a photovoltaic unit.
These cells have the advantage of having a thin thickness of not more than one micrometer, meaning that their thickness is less About the thickness of the silicon chips used in the first generation of cells by about 100 to 1000  Once.
As a result, the cells became lightweight and flexible, which distinguished them for use as an energy source With mobile devices such as phones and laptops, but their efficiency is still low and reliable
Within 12%, the reason for the low efficiency is that the thickness of the second generation cells is very thin.
Consequently, it does not absorb the same amount of solar radiation spectrum that the slides absorb
Silicone thicker (produced in the first generation).
Examples of second-generation cells include; amorphous silicon , Nanocrystalline Si, Cadmium telluride

This is known as the « nanotechnology » generation.
– Products of this generation are still in the stage of research, evaluation, and development at the experimental level
The laboratory is expected to have a wide range of creativity.
Pigment solar cells are one of the most important types of the third generation of photovoltaic cells, as it has several technical and economic advantages. Other cells include polymeric solar cells and nanocrystalline cells.
Crystalline silicon cells are the most common on the market, accounting for 72 percent
One of the benefits of using silicon in solar cells is that the amount used in solar cells can be reduced Its production is as follows:
-In the year 2004 it was 13  gr / w:
– in the year 2008 became 6.3 gr / w:
– Access scheme to  5 gr/w

Advertisements Three Simple Steps to get free electricity We all need electricity, and no one can stay without it. Some of us have the ability to make a successful project to get some free power, but some others have no idea how to do that. Step by step, in this article, I will explain to…

Advertisements What is the purpose of sizing an installation? The purpose behind the sizing of installation is to fix the modalities of implementation according to technical and financial criteria.Technical studies concern the design and sizing of photovoltaic fields and system components.These components are mainly:– Inverters-The batteries– Regulators (or converters)– The dimensioning allows:– an evaluation of the…

Advertisements   Solar energy is a source of energy that depends on the sun. This energy makes it possible to produce electricity from photovoltaic panels or thermal solar power stations, thanks to the sun radiations captured by solar panels.   #1. What should I know about this source of energy? Soar energy field is a…

Advertisements   The problem with Chinese solar panels is the lack of information and traceability. It is certain that some Chinese panels are made under deplorable social and environmental conditions. Sometimes it is also counterfeit. Other Chinese solar panels are quite reliable. Their main advantage is of course their cost, up to 2 or 3…

Advertisements Notions of equivalent number of hours When we buy a PV module, the supplier gives us its power – peak PC under standard conditions, that is to say for an insolation of 1 kW / m2 (1000 w / m2). However in real conditions, the sunshine is much lower and variable during the day:…