Skip to content
Solar energy is a source of energy that depends on the sun. This energy makes it possible to produce electricity from photovoltaic panels or thermal solar power stations, thanks to the sun radiations captured by solar panels.

#1. What should I know about this source of energy?

Soar energy field is a huge field and there is some information that must be known for everyone working in this field, I think it’s obligatory for you to know such things like what is a solar cell? how it produces electricity? and how many types of solar cells? so in order to get all these answers, I invite you to read these two articles, the first is for beginners and the second is for advanced

#2. How the solar cell produces electricity?

The first thing anyone who works in the field of solar energy, whether he is an engineer or a trader who sells solar panels or an ordinary person who wants to install solar panels in his home, must know that Solar cell generates constant current when exposed to the sun, where photons in sunlight hit the surface of the cell and release electrons in the solar cell, and thus the passage of electric current, then the electric current is the movement of electrons

The second section consists of only one type

for this type Companies refer to it in the datasheet as the following symbol  :

A: refers to Amorphous.
Si: refresh to Silicon

The two dominating the world market are Poly and Mono, Mono is the richest and the Amorph is the cheapest this is in terms of price, and in terms of efficiency, Amorphous has the minimum efficiency when we compare it with Mono and Poly.

#3.Corporate shortcuts to denote the type of cells

On the surface of the solar cell, there are parallel lines called fingers and There are also other lines called busbars  .

#5. What are the common types of solar panels?

Solar panels are three types that differ according to the silicon cells made of these panels, very briefly and in order to simplify this first issue, solar cells are divided into two main types:

#6.What is the Datasheet and what it contains?

you cand find in the datasheet of solar panels the following information:

Note: All of these preceding values ​​are given under certain conditions called Standard conditions (1000 watt/m²,25 °c, 1.5 density of atm )

Each solar cell, and each combination of solar panels and solar arrays, has its current-voltage relationship. Consequently, they can supply a current I at a voltage V. The purpose most important of a solar panel or network is to provide electrical energy that results of the multiplication of V and I., It’s about not only providing I and V, but also the maximum power P = V x I

The Power of the panel that the manufacturer of solar panels gives that you find in a datasheet is the maximum power in the standard conditions, and the point that many workers in this field don’t realize is when the company says that the power of the panel is 100 watts, this does not mean that you will get 100 watts during the day. Perhaps you may get 100 watts at ten o’clock and after a minute when a cloud passes, you will get 60 watts and at midday 80 watts and in the evening you get 60 watts good to explain this important point.

As a final result of the system failure after a while,  and a lot of People paid the price of the system twice and three times, and if you go back to the reasons, it will be the result of a miscalculation, which was mainly caused by the lack of knowledge of the difference between the Voltages or currents of the solar panel.
refer to the Datasheet of the solar panel or the inverter.

The Fill Factor (FF) is a measure of the quality of the solar cell  and it is an important technical parameter  to know the quality of the cell and the solar panel in general, This Factor is measured by knowing some of the parameters of the solar panel
It is calculated by comparing the maximum practical power that would be output power to the theoretical power at both the open-circuit voltage and short circuit current.

After knowing these values from the datasheet of each panel, the Factor  is calculated through the following mathematical relation:

The cell quality factor is always smaller than one, and the closer it is to one the better and the meaning of this is that  The theoretical values ​​for the amount of energy produced by the cell given by the manufacturer on the dashboard are the same as the values ​​produced by the cell during work, and some companies say that the cell quality factor if it is smaller From 0.7 (70 %) the lower the quality of the cell and the if it is greater then this value the cell is better.
In reality, This will be true, but most solar cell manufacturers have exceeded this number to above this value. to even 0.8(80%)

we can also calculate and know the value of this factor from the IV graph as its shown on the following figure, and you have to know that the IV graph is so important for the engineer. 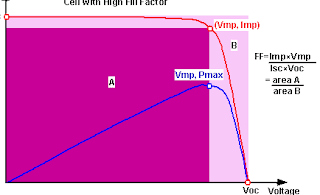 what is the Moist heat test?

The moist heat test for photovoltaics is an accelerated environmental aging test that determines the ability of a solar panel to withstand long-term exposure to high temperatures and moisture penetration.

How they tested it?

The wet temperature test is performed by applying 85 ° C ± 2 ° C with a relative humidity of 85% for an unbroken cycle of 1,000 hours, which exceeds one month.

1000 hours of wet heat test at 85 ° C and 85% relative humidity equals several years of outdoor exposure. The plate to be tested is placed in a wet heat test chamber where the plate is exposed to these conditions.

#11. What are the defects that can occur during a wet heat test?

This test specifically challenges the lamination of photovoltaic cells and the closing of edges from moisture. The peel strength of the PV cells that are laminated according to the traditional lamination process is crucial.
This test can detect problems with the lamination process and the sealing of the edge of the solar cell.
Rust removal and corrosion can be detected in various cell parts due to the penetration of moisture.
A wet temperature test can reveal various defects, such as lamination, degradation of the vitreous (AR coating), frame erosion, discoloration of the metal mesh, and the junction box attachment.

#12.What type of silicon photovoltaic cells has immunity to the effects of oxygen interaction with boron?

#13.One way to protect from hot spots on PV panels

#14.What is the most secure type of Solar Inverters?

#15.Which of the following technologies is theoretically the most cost-effective solar PV manufacture?

#16.What kind of solar panels should be chosen for our projects?

#17. What is the highest temperature reached with focused AI technology?

#18. What does the symbol Class A, Class B, or Class C usually mean on the solar panel datasheet?

Installation of a solar system

#19.Angle and Orientation of the Modules

#20.The use of completely identical panels in any solar energy project

#21. Does the design of solar panels need an architect and civil engineer ??

The respectable factories that make the bases for the solar panels supplied with the purchase of a mathematical study of the iron or aluminum bases, indicating the size of the concrete bases and the weight of each base, of course, after asking for the coordinates of the required wind speed.
So solar companies can do without civil engineers if the business is established With that.

#22. Can you place the battery inside the house?

Generally, put the battery in the shed. It is an upper storehouse that is generally found in our homes above bathrooms or kitchens. It is considered a cold place and has ventilation nets on the skylight and is not exposed to heat, sun, or water.
Certainly, the most important thing is that it is far from the arrival of children or even adults and that there are no flammable materials besides it like gas, gasoline, diesel, fabric, etc. This is in terms of location.
In terms of safety, the charger is examined and has two protection stages to ensure that the temperature does not rise and that the battery is not overcharged.

Second,  place a cloth over the battery, which is intended to absorb vapors that are dating from the battery. We train the customer to replace this piece every month because it will definitely wear out.

And also make sure that the battery compartment cover contains a hole or hole for leaking gases without causing pressure. And isolate the battery poles in a way that is available to avoid shorts with deformation.

Finally, asking the customer not to approach the system and contact us to do the service at the hands of trained technicians.

Of course, putting the battery in the hall, the kitchen, or the bedrooms is a danger, a danger and a risk that cannot be discussed, and the least danger is the wear and tear of furniture from the battery fumes. This is the weakest risk not to mention the danger to humans, children, and the place.

#23. What is the effect of the Accumulation of dirt on the solar panels?

There are several steps to follow to properly size this type of installation:

Qualitative parameters of the photovoltaic installation

The Electricity production of the photovoltaic installation

The evaluation of the solar deposit and the quantification of the various losses allows us to calculate the yield of an autonomous photovoltaic installation. Note that the electrical production thus produced is physically adjusted to the consumption of electrical receivers. There is a simple analytical formula for estimating the electricity production necessary for a photovoltaic installation:

Effects of shading on the photovoltaic installation

To function optimally, a photovoltaic solar installation must be subjected to the least possible shade. However, certain constraints linked to the place of installation (presence of mountains, trees, chimney, electric pole, etc.) cannot be avoided.
Read also :9 free websites to learn Solar energy
You May like also: SOLAR PANELS QUALITY AND COSTS IN 2020

What is the purpose of sizing an installation? The purpose behind the sizing of installation is to fix the modalities of implementation according to technical and financial criteria.Technical studies concern the design and sizing of photovoltaic fields and system components.These components are mainly:– Inverters-The batteries– Regulators (or converters)– The dimensioning allows:– an evaluation of the energy…

We all need electricity, and no one can stay without it. Some of us have the ability to make a successful project to get some free power, but some others have no idea how to do that. Step by step, in this article, I will explain to you how to make this possible, how…

The problem with Chinese solar panels is the lack of information and traceability. It is certain that some Chinese panels are made under deplorable social and environmental conditions. Sometimes it is also counterfeit. Other Chinese solar panels are quite reliable. Their main advantage is of course their cost, up to 2 or 3 times…