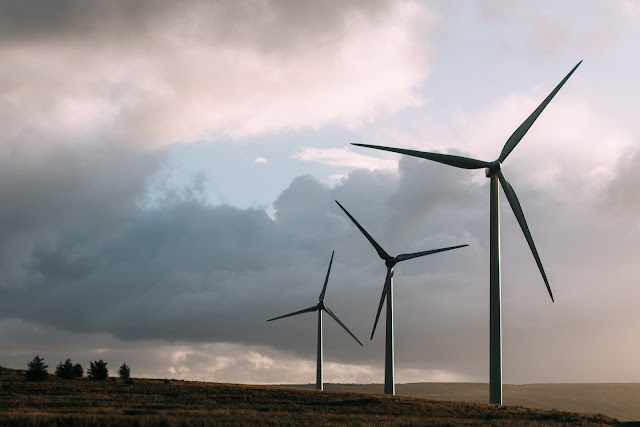 A wind turbine produces wind-based electricity. Its force activates the rotor blades that set an alternator in motion.
There are many different wind turbine design categories, but they are generally grouped into three types based on the axis of rotation orientation. The most common type of Horizontal Axis Wind Turbines and Wind Turbines of the Vertical Axis and the ducted turbines.

These days, HWATS wind turbines are the most used, all the components are at the top of the tower as the winds blow in height. The tower varies between 10 and 180 m in height depending on the type of wind turbine. This type of turbine can generate 12 megawatts of electricity per day, with 25 to 60-meter long shaft blades making 25 turns in a minute. 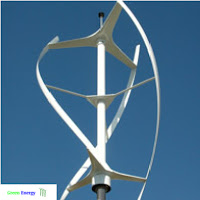 The power of a wind turbine variates according to the size, wind speed, and air density.

η: The coefficient of Bet ‘ z, equals to 16/27.
The maximum  energy that the Turbine can extract from the  total  kinetic energy  captured by the three  blades is  59 %

#5.The first country in this technology

China is the first country in this technology .the country has impressed the world by installing more than 145362 Megawatt in the last five years.

Rotating part of the wind turbine placed in height to capture strong and regular winds. It is composed of blades (usually 3) of composite material that are set in motion by the kinetic energy of the wind. Connected by a hub, the latter can average each 25 to 60 m long and rotate at a speed of 5 to 25 revolutions per minute.

Structure supported by the mast sheltering the different mechanical elements. Direct drive wind turbines are distinguished from those equipped with a gear train  (multiplier/reducer) depending on the type of alternator used. Conventional alternators require an adaptation of the speed of rotation with respect to the initial movement of the rotor. 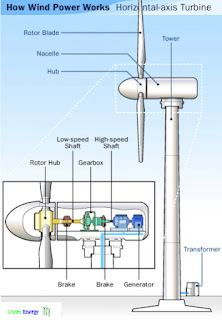 Composed of the mast, the electrical control system, and the transformer. Generally of conical shape, the mast supports the nacelle. It measures between 50 and 180 m high and has a diameter at its foot between 3 and 8 m. An opening at the bottom of the mast provides access to the various equipment of the wind turbine including the transformer which increases the voltage of the electricity produced in order to inject it into the network.

To start, a wind turbine requires a minimum wind speed of about 14 km / h. For safety reasons, the wind turbine automatically stops operating when the wind exceeds 80 km / h.
The rotor drives an axis in the nacelle, called a shaft, connected to an alternator.
Thanks to the energy provided by the rotation of the axis, the alternator produces an alternating electric current.

Wind Turbines are white, yes but why? Is it simply an aesthetic criterion or are there other reasons for this color? According to a study by the British University, the color of the mat (white or gray color) attracts insects such as flies, aphids, mites, butterflies, or beetles. Birds or bats, attracted by these insects,…

Description of HAWT wind Turbine A wind turbine is constituted by a tower at the top of which is the nacelle. Given as the wind speed increases as you move away from the ground, a tower can measure between 50 and 80 m from above. Typically a 1 MW wind turbine is 80 meters high,…