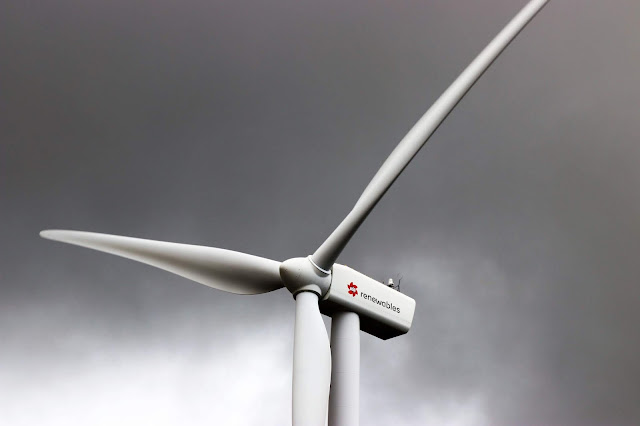 Wind Turbines are white, yes but why? Is it simply an aesthetic criterion or are there other reasons for this color?

According to a study by the British University, the color of the mat (white or gray color) attracts insects such as flies, aphids, mites, butterflies, or beetles. Birds or bats, attracted by these insects, may then strike the blades or mast, and be killed in some cases, particularly at night and in summer when the insects are more abundant. On the contrary, the purple color attracts them less, followed by blue.

Some countries have changed the color of wind turbines. In Germany, the manufacturer Enercon paints the base of the mat in green. In Quebec, the most recent parks have also adopted a shade of green.
In France white or gray-white remains mandatory for visibility constraints related to aeronautics, making their integration into the landscape more difficult.

On the aesthetic side, the white color of wind turbines allows them to reflect UV rays, thus sparing these rays from damaging the material. This is important since wind turbines are expensive and must, therefore, survive for a long time to be profitable. Any other color would dramatically reduce the life expectancy of the devices.

The white color of wind turbines, however, attracts insects and predators that feed on them, which can also damage equipment. However, the damage caused by the surrounding fauna is not large enough to change the color of the wind turbines.

Better integration into the landscape

In addition, according to various studies, white allows better integration of installations in landscapes.

Description of HAWT wind Turbine A wind turbine is constituted by a tower at the top of which is the nacelle. Given as the wind speed increases as you move away from the ground, a tower can measure between 50 and 80 m from above. Typically a 1 MW wind turbine is 80 meters high,…

#1. What is a home wind turbine? A home wind turbine is in a range of nominal powers between 0.1 and 36 kW. The machine consists of a rotor, with a horizontal or vertical axis, mounted at the top of a mast. The rotor incorporates a generator that transforms the mechanical energy of the…

#1. What is a wind turbine? A wind turbine produces wind-based electricity. Its force activates the rotor blades that set an alternator in motion. There are many different wind turbine design categories, but they are generally grouped into three types based on the axis of rotation orientation. The most common type of Horizontal Axis Wind Turbines…