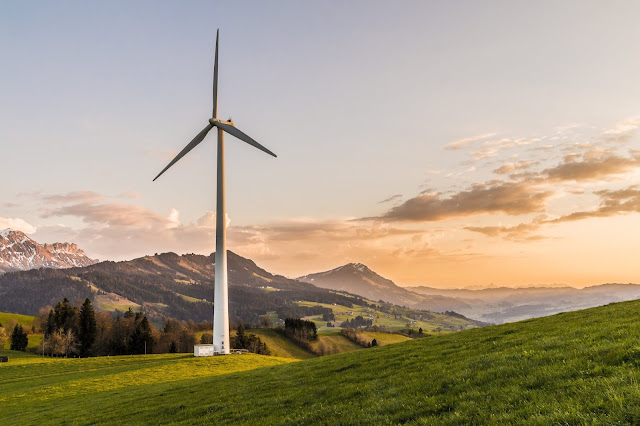 Wind power currently occupies an increasingly important part in the balance sheet
energy from many countries and it now represents a production of 60,000 MW worldwide.
This energy source also has the advantage of being ecologically very clean since a wind farm fleet does not emit pollutants or greenhouse gases and does generate no waste and involves only minor risks on the environment. We can conclude that the ecological balance of wind energy is very positive.

The choice of a wind site is essential in a wind energy production project because the energy produced depends on the wind resources of this site and on the structure of the turbine itself.

The estimation of these resources presents a particular difficulty because of the variability of the wind because the amount of energy available at a site varies with the season and the time of day.

The forecasts of these resources as well as the adaptation of a machine to a site are based on the statistical distribution of the wind speeds of this site.
The characteristics of the wind in a site (average speeds, frequencies, directions, etc.) help to estimate the amount of energy actually extracted from the wind field since these parameters directly influence the operation of wind turbines (start, stop, orientation, etc.)
This information is also necessary to optimize the design of wind turbines in order to maximize the energy extracted and to minimize the costs linked to the production of electricity. The statistical distribution (the frequency of each speed) is also necessary for the calculation of the fatigue because it allows estimating the number of operating cycles, during the duration use of the machine.

The blades of a wind turbine are the most flexible part of this machine and their behavior modal has a great influence on its total dynamics and its energy performance.

Characteristics of the aerodynamic profiles:

The chord is the segment connecting the leading edge and the trailing edge, the airflow is from left to right. The angle of incidence (attack) is the one that makes the chord with the relative wind speed.

Chord
The chord of a profile is the straight-line joining the leading edge to the trailing edge.
Its length is noted Profile letter l
Thickness
The maximum profile thickness is the maximum distance between the upper surface on the one hand and the lower surface on the other. The thickness is noted h
Angle of incidence
It is the angle formed by the profile chord and the relative wind speed vector. This angle is called the angle of attack in English. For the airplane, it is the angle formed by the longitudinal axis of the airplane and the speed vector. alpha

In the aerodynamic modeling part, the optimal shape of the propeller of aerogenerator as well as the aerodynamic forces are estimated by the method BEM. These efforts will be used to assess energy performance as well as to analyze the structure of the propeller.
The optimal propeller design for a given site should be based on the speed of the wind corresponding to a maximum of recoverable energy (available).

The most common airfoils are the NACA foils and there are 3 types:

Modal analysis of the blades

For the modal analysis of the blades, two methods are used, their results are compared. The frequencies were by these two approaches on the same order of magnitude, the corresponding eigenmodes have similar forms. These modes are also compared to those which exist in other works.
We can conclude that the first approach (solving the differential equation of movement) is a practical tool that is inexpensive to estimate the eigenmodes, despite a limitation compared to sophisticated software like ANSYS (Ansys: engineering simulation and 3D design software ).

The dynamic modeling of the blades

The dynamic modeling of the blades by finite elements made it possible to estimate constraints
dynamics for blades of complex geometric shapes, having different profiles and different materials.
This calculation showed that the blades made of composite materials are more resistant than
those in aluminum alloy, also the NACA 63-421 profile is best suited, among those studied, because it obeys the requirements of resistance and performance. That is due to these geometric characteristics (its shape and thickness).

The maximum efficiency of a Wind-Turbine

The maximum efficiency for an ideal wind turbine is approximately equal to 59.3%. In practice, this efficiency is never achieved.

In order for the propeller to extract energy from the wind, the speed of the latter must decrease when it crosses the propeller, an ideal machine should slow the wind speed by 2/3

Finally, extracting all the available energy from the wind is practically impossible, in practice, the efficiency of wind turbines does not exceed 45%.

Average power is the parameter the most decisive in the choice of a wind site.
The optimal propeller design for a given site should be based on the wind speed
which gives the maximum available energy.

Knowledge of the statistical distribution (the frequency of each speed) of the wind site is
also necessary for the calculation of fatigue because it allows estimating the number of cycles of
during the life of the machine.

How to import data on Qblade? What is Qblade?QBlade is a multi-platform simulation software for wind turbine blade design and wind simulation. it does not need any installation, as soon as it is installed on the computer you work directly on it   How to import data Foils on it?  Step #1  NACA airFoils  click on…