A wind turbine is constituted by a tower at the top of which is the nacelle. Given as the wind speed increases as you move away from the ground, a tower can measure between 50 and 80 m from above. Typically a 1 MW wind turbine is 80 meters high, which corresponds at the height of a 32-story building. The tower has the shape of a cone trunk where, inside, are arranged the cables for the transport of electrical energy, the control elements, the equipment of connection to the distribution network as well as the access ladder to the gondola. The nacelle includes the entire system for converting wind energy into electrical energy and various actuators ordered.
Ring generator, Orientation drive, Rotor hub, Rotor blade, Mast, foundation 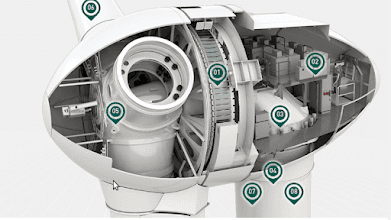 E-module: The E-module is located at the base of the wind turbine tower. The power cabinets and other components are fitted at different levels of the machine. An inverter here transforms direct current into alternating current adapted to the grid.

Note: I will talk  about this part  in another article

Power Produced by The Wind Turbine

The energy power that a wind turbine can provide is proportional to the wind speed. It is therefore advisable to seek a constant and strong wind, in height, in order to avoid any disturbance due to the natural obstacles (relief, vegetation) or artificial (buildings…), and open spaces. This is why we build large wind turbines (sometimes more than 120 meters high) and we look for free spaces, in the open sea for example with offshore wind.
The power is proportional to the area swept by the blades. The length of the blades ranges from 15 to over 60 meters. The rotor can thus reach a diameter of almost 120 meters which would entirely cover a football field.

Dismantling and lifetime of wind Turbines

The lifetime of a wind farm is estimated at 20 years, once the operation is completed, the regulations specify, in article L 553-3 of the Environment Code, that the operator of a wind turbine is responsible its dismantling and the restoration of the site.

Made of steel and plastics, a wind turbine can be dismantled at the end of its life and is almost completely recyclable and leaves no pollutants on its site. The dismantling does not, however, plan to remove the concrete base of the wind turbine, because it has no interest in being recycled: the cost of transport would be much higher than the gain obtained.

The dismantling of a wind installation must include:

When the Wind Turbine starts and when it stops?

The capacity of wind turbines

The capacity of wind turbines (or their size) varies from kilowatt to a few Megawatts.The length of the blade is the deciding factor in the capacity of the wind turbine, as the length of the blade increases as the rotation surface increases. At the same time, high constellations make the level of dawn higher than the level of the Earth’s surface, where the wind speed increases, and the energy density increases.
In general, large wind turbines have shown their cost better thanks to improvements in their design and to the reduction in the value of the electrical and civil works necessary for these wind turbines, and therefore their savings have improved, in particular in the case of the creation of wind farms.

why wind turbines are three-bladed?

The wind turbine has fixed or orientable blades and rotates at a nominal speed of 25 to 40 rpm. The greater the number of blades, the greater the starting torque and the lower the speed of rotation. The single and twin-blade turbines have the advantage of weighing less, but they produce more mechanical fluctuations.
They have lower energy efficiency and are noisier since they spin faster. They cause a more visual disturbance in the opinion of landscapers. In addition, an even number of blades should be avoided for reasons of stability.

When the upper blade reaches the most extreme point, it captures the maximum power of the wind. At this moment, the lower blade crosses the sheltered zone of the wind by the tower. This provision tends to bend the entire turbine backward. This explains why 80% of manufacturers manufacture three-bladed wind turbines

The required rotational speed of the rotor

The speed of rotation of the wind turbine can vary from 25  to 40 rpm. The asynchronous generator which transforms kinetic energy into electrical energy requires a rotational speed of the rotor of 1000-2000 RPM. It is, therefore, necessary to use a multiplier to increase this speed of rotation.

A multiplier adapts the speed of the wind turbine to that of the electric generator (which is generally driven at around 1500 rpm). This multiplier is equipped with a mechanical brake disc actuated in an emergency when the aerodynamic brake fails or in the event of maintenance of the wind turbine.

The generator (or alternator) is generally asynchronous, and its electrical power may vary between 600kW and 2.5MW.

The case of wind speed being variable

On the other hand, the wind speed being variable, the characteristics of the energy delivered are variable (voltage, frequency). It is, therefore, necessary to rectify this current before delivering it to the conventional electrical network. In addition, there is a wind speed for which the power supplied by the wind turbine is maximum. Below this speed, the power is lower, beyond, the wind turbine is gradually braked through different systems:

Some advantages of wind energy

Wind Energy in the Middle East   The wind is an important source for generating clean energy, and although most Arab countries in the Middle East do not have strong wind speeds, they depend mainly on solar energy because most of this regions has high solar radiations during the year, but some countries, such as…